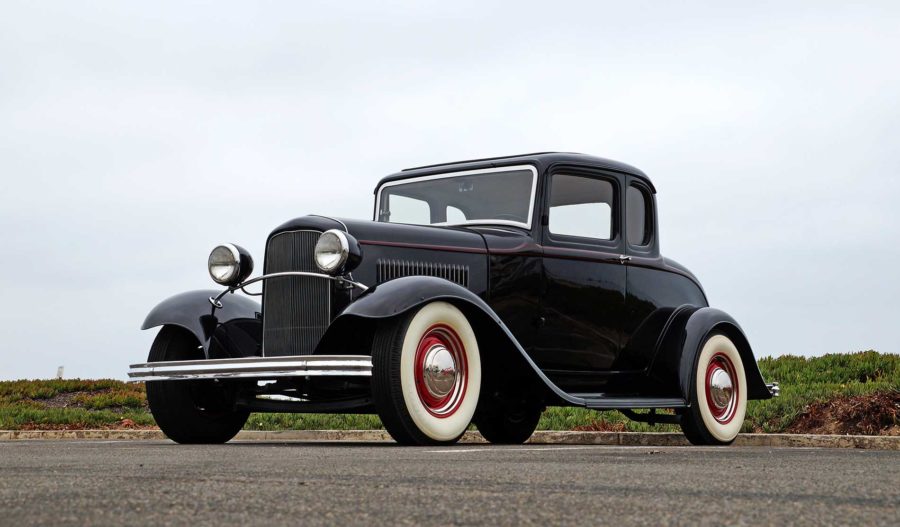 Offered for sale is a gorgeous, uncut original steel-bodied 1932 Ford 5-Window Coupe hotrod finished in striking black over red and fitted with a strong Chevrolet 283ci small block V8 mated to a Ford 3-speed manual transmission. The recipient of a tasteful, $40k+ restoration completed in 2014, over the last 5+ years the car has been used sparingly as a fair weather weekend cruiser and regular participant in local events and shows. The current owner first became familiar with the car over 60 years ago, when his high school friend acquired the car. The two of them refurbished and hot-rodded it in late 1950s Oregon, dropping in the Chevy 283 and putting in time after school, on the weekends and over the summer to turn it into every high school guy’s dream car. The current owner’s buddy never parted with the car, ultimately enjoying it for 50+ years until his passing in 2012. At that point the car was offered to the current owner by his friend’s widow, an offer he gladly accepted, which in turn resulted in the car being shipped here to Santa Barbara, CA. It’s believed that the car was in Oregon from 1932 – 2012 (ownership history prior to 1958 is unconfirmable) and Santa Barbara, CA from 2012 – present.

While always garaged and free of rust, the car hadn’t been driven in years, the interior had degraded and the bright orange and red paint that was first applied in the 1950s had deteriorated beyond salvage. But the car was extremely solid and complete (photos included in our site’s photo gallery), and consequently the owner commissioned a full restoration. He didn’t, however, want to erase the memory of his friend’s ownership, and consequently he elected to leave the engine-turned dash insert and (fully functioning) gauges unrestored.

Everything else was addressed – over 750 hours of mechanical and cosmetic restoration occurred over a 10-month period, including a sorting of the engine (the Chevy 283 was completely gone through, but didn’t require a rebuild), transmission and electrical, as well as dismantling and stripping the body, a full refinishing in single stage paint, re-chroming of all the bumpers and trim, new components where necessary or beneficial, a completely reupholstered interior (leather seats and panels, high quality black carpet and white headliner), new rubber throughout and, of course, reassembly. A line item spreadsheet of that restoration is included, however it’s been advised that it’s by no means comprehensive – per the owner, and independent of the cost of acquisition, well over $50k was spent to ensure the car would be a reliable, beautiful, understated hotrod, and the car clearly has achieved that goal in spades.

Less than 700 miles have been driven since its restoration and it’s continued to be properly garaged, resulting in unsurprisingly excellent cosmetic condition. The single stage black finish is mirror quality, marred only by a few exceedingly minor imperfections (a couple of small bubbles, chips, etc. here and there), the body is entirely straight with consistent panel gaps and fits, the pin-striping along the waistline and louvers is unblemished, the chrome is in excellent shape and all of the rubber looks virtually new. The same is true of the car’s interior, very well reupholstered in red leather, black carpet and cream headliner – it all looks virtually new. The undercarriage is extremely clean and entirely free of rust – there’s to-be-expected corrosion on hardware, but the car remains entirely rust-free and as solid as it was in the late ‘50s. The car presents beautifully and has always been a star at the local shows and events it’s participated in over the last 5+ years. It’s just as strong mechanically, starting effortlessly, idling smoothly and pulling strongly and smoothly through each of the gears.

If you’re in the market for a tastefully restored, well-sorted example that’s ready for any show as much as it is a Friday night dinner out, this car deserves your serious consideration. Two buddies have owned this car since 1957, and the current owner would love to see it find another appreciative garage. With a few dozen heavily modified, high-priced hot-rods comps out there, this car affords all the fun of those cars in the most understated way a ’32 coupe can. Turn-key, beautiful, super clean and having been under great stewardship for 6+ decades – the buyer’s going to have a great time with this little Deuce Coupe.