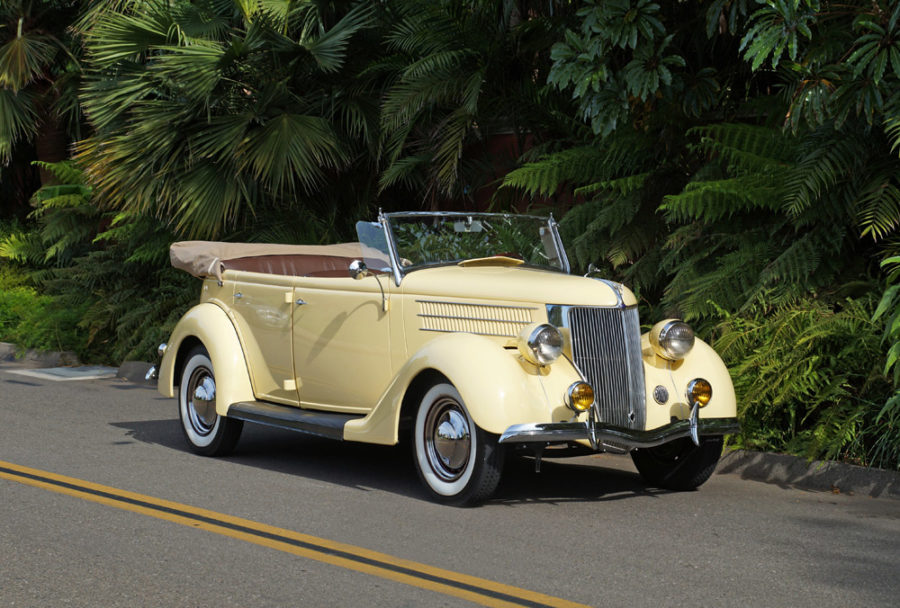 Gorgeous restored 1936 Ford Phaeton retaining its original flathead V8 and finished in Tacoma Cream over a brown interior with burgundy accents and a tan soft top.

Offered for sale is an absolutely gorgeous restored 1936 Ford Phaeton retaining its original flathead V8 and finished in Tacoma Cream over a brown interior with burgundy accents and a tan soft top. This car’s story is one that we can really appreciate, and not just because its most recent owner was one of my father’s best friends from high school. Barry had a ’36 Phaeton when he graduated high school in Ventura, CA in 1953. He only had the car for a few years, but for the ensuing 60+ he would often remark that it was the best car he’d ever owned. And so, when he had the opportunity to acquire another one a few years ago, he jumped on it, subsequently having it repainted, sorted and dialed in, and using it as a well-loved Sunday driver until his passing earlier this spring.

It brought him immense pleasure late in his life, so he was completely distraught when he was woken up in the early morning hours this past December, forced to evacuate due to the fast-moving Thomas fire that wreaked havoc in his little ocean-side town. Without enough time to collect family heirlooms – let alone his Phaeton – he watched in horror from afar as the fire consumed house after house on his ridgeline, assuming there was no possibility his house would survive. But while many of the surrounding homes were lost, a fire crew from the LAFD had arrived on the scene, defending and eventually saving Barry’s house.

He was eternally grateful for their efforts, and he got the opportunity to thank them in person when the crew came back a week later to meet those whose homes they’d saved. The first thing Barry did was open the garage and pull out the Phaeton, showing them what he was most thankful for them saving.

Sadly, Barry passed away a few short months later, but the pride he had for his Phaeton is still palpable when you get behind the wheel, which is exactly the feeling he had when he acquired the car from its previous owner. Originally comprehensively restored between 1983 and 1986 at a cost of more than $25k (nearly $60k in today’s dollars), the car had for many years been a car show regular, the prior owner’s pride and joy. When Barry got the car it was already in stellar condition and required very little sorting, but nostalgia for his first Phaeton caused him to have the car refinished in Tacoma Cream last year at a cost of more than $17,500.

The result of both prior owners’ efforts is immediately apparent, the car’s presence drawing a crowd at any Cars and Coffee or show. The finish is exceptional – deep, lustrous and entirely consistent, marred only by a small scratch on the passenger side front fender below the headlamp and a touched up chip on the driver side rear door rail. The body is entirely straight, retaining factory consistent panel fits and gaps, with no evidence of any accidents, bodywork or filler. All of the chrome is in great shape, as is the glass and rubber. While the top does have some wear, it remains presentable, the boot cover is in great shape save for a one inch long cut along the central seam and the car is currently without side curtains; neither Barry nor the previous owner ever ordered them because the car was only driven on fair weather weekend cruises. The car’s interior is in equally clean condition, the brown seats showing virtually no wear, the carpets and interior panels in excellent condition and the painted dash and steering wheel without flaw. The hubcaps were re-chromed in 2017 at which time the wheels were wrapped in Coker wide whitewall tires installed.

Mechanically the car is in excellent condition, the original 221 flathead V8 starting effortlessly, idling consistently and pulling strongly and smoothly through each of the manual transmission’s gears. The car drives and brakes straight and true and the ride quality is superb. The car’s as grin inducing from behind the wheel as it is to see passing on the street, the perfect weekend cruiser, show participant or garage queen. If you’re in the market for a turnkey Phaeton, this well-loved and beautifully finished example deserves your serious consideration.