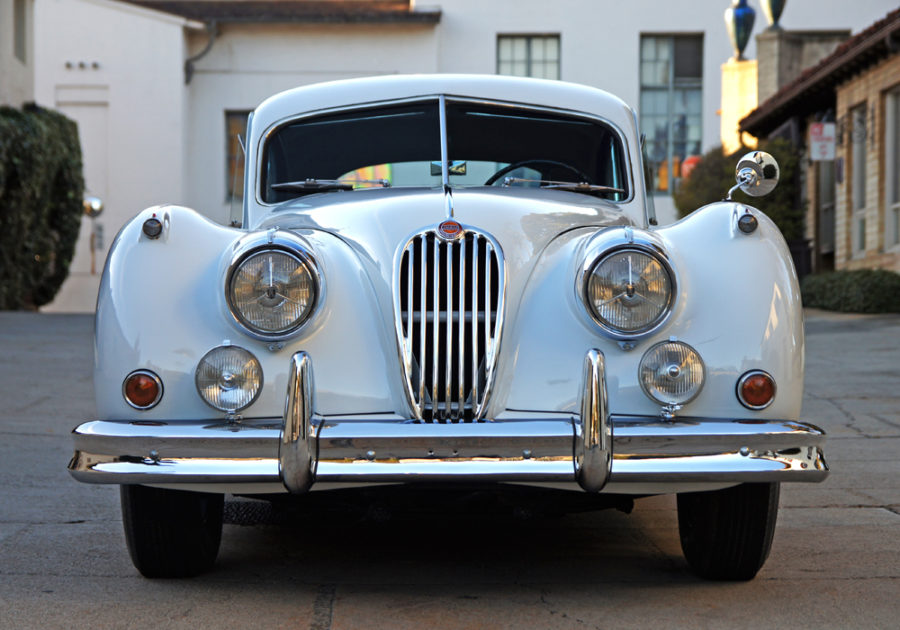 Only 1,959 left-hand-drive fixed head coupes were built, the lowest production run of the model. The most desirable option available was the Modified Competition (MC) package, or the Special Equipment (SE) as it was known in the European and International markets. This package included dual exhausts and fog lamps as well as, more importantly, a C-Type cylinder head (derived from the Le Mans winning C-Type Jaguars) and two larger H8 SU carburetors, a combination that brought the stock XK140 horsepower from 190 to 210. If you’ve been looking for an investment grade sports car that’s still at a price point where you can enjoy the full range of ownership (instead of just trailering it between shows and your climate controlled garage), then the XK140 MC – and this car specifically – deserves your serious consideration.

This car was originally distributed through Charles Hornburg of Los Angeles, delivered to its first owner in Corpus Christi, Texas where it enjoyed a well-loved existence, kept out of the elements and getting both regular use and maintenance until the late 1970s. It then made its way to California where it received similar treatment before being put away into dry storage around 1985. It remained there until 2006, when the heir of the deceased second owner discovered it and revived it mechanically. At that time the odometer showed a mere 32,000 miles, believed to be correct after analyzing the condition of the car and its mechanicals. It was used as a very original weekend driver until early 2012, which is when we were fortunate enough to have acquired it.

Shortly thereafter we began the year-long process of returning it to its original road-going glory, taking it completely apart, stripping it to bare metal, refinishing it in its original color, re-chroming everything, reupholstering the interior to its original factory specs and having the renowned Madera Concepts refinish the extravagant burled walnut dash and interior wood train. The engine ran strong with excellent compression, but the brakes needed to be completely rebuilt and a new stainless steel dual exhaust was installed for good measure. The undercarriage was thoroughly cleaned and detailed to ensure that it was completely original and solid. When entirely stripped there was no evidence of accident or rust repairs anywhere on the car.

It’s one of the most beautiful cars ever designed, iconic and revolutionary, and every true enthusiast’s garage – be it that of a significant collector or humble weekend driver – is deserving of a Jaguar XK. This is an exceptional and correct example that checks every box on a serious buyer’s checklist: rare and desirable MC option, finished in a timelessly elegant color combination, heritage certificate correct with a provenance that indicates a dry, well-cared-for history.