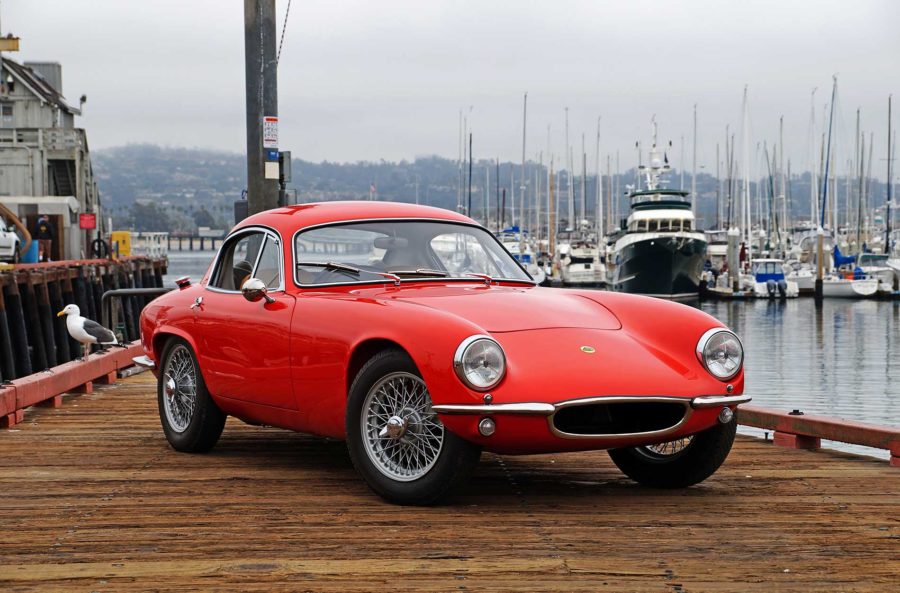 Arguably one of the finest Type 14 Lotus Elites in existence, a three owner, 33k original mile, entirely numbers matching and comprehensively restored 1960 Elite Series I with a rare heater unit installed. Dedicated website with tons of photos, video and documents at www.1960lotuselite.com

A dedicated website with tons of photos, video and documentation can be seen at:

While 1151 was in incredible original condition, the car’s current owner had been searching for the ideal platform on which to perform a world-class restoration. 1151 checked all of the right boxes, and so, after enjoying it in its original state for the better part of a year, the owner commissioned Roy Miller, a Pebble Beach Concours d’Elegance Judge and British marque expert mechanic with over 50 years experience, to oversee its restoration with the intention of equaling or bettering its factory build. Beginning in the summer of 2013, that restoration ultimately took more than three years and, due to the owner’s exacting attention to detail and correctness regardless of cost, with the help of Mr. Miller’s oversight and input from Dennis Ortenburger, the historian and author of the Elite Bible Lotus Elite: Racing Car for the Road (who also became the owner’s close friend), the consignor’s goal has clearly been achieved.

Sold by Lotus to Jay Chamberlain (a race car driver and West coast distributor for Lotus Cars of America) under invoice # ELC 565 dated January 26th, 1960, the car left the factory trimmed in striking and uncommon Poppy Red with a tan interior. Chamberlain sold the car to Dr. G. J. Gardner of Boise, Idaho in April 1960, the first of two Lotuses he would eventually sell to Gardner (the second being a 1963 Elan). Gardner drove the Elite throughout the 1960s and 1970s, entering it into many events including shows, rallies and auto-crosses. He founded the “July Jackpot Jamboree” rally, a three-day, multi-hundred mile drive from Boise to Elko, Nevada, and the car won the best mileage trophy for all eight years of the event. A copy of a 1961 newspaper clipping with a picture of the car was graciously provided by the Elite World Register and can be forwarded upon request. At some point in 1977, Dr. G. J. Gardner transferred ownership to his son, Dr. Charles Gardner and his wife Shirley, also of Boise, Idaho. In the mid-1980s Dr. Charles Gardner moved to Woodburn, Oregon, bringing the Elite with him, and he drove, preserved and maintained the car until finally parting with it in 2012.

During the Gardners’ 50+ years of doting ownership the car amassed a mere 33,500 miles and it clearly showed, considering the minimal amount of patina that the car exhibited when the current owner acquired it. The original paint was excellent, marred only by a handful of minimal chips and scratches, the most notable being one on the nose between the passenger side light pylon and the Lotus badge. The panel fit on the car was and is fantastic and the body wasn’t suffering from the “waviness” typical to most Elites. The brightwork too was in great original shape, and the rubber was in good shape throughout. The wire knock off wheels were completely original and wrapped in rubber with plenty of remaining tread. The car’s interior is also in fantastic original condition, the seats, carpets and interior panels bearing just the right amount of patina but free of any notable imperfections.

So why, you might ask, did the current owner wish to embark on 1151’s extensive and thorough restoration process? Having worked with him over the last decade plus, the best explanation that we can provide is that for any car he owns (and there have been dozens of them over the years, each significant in their own way), he endeavors to have the very best possible example and enjoys the process of ensuring each car meet that standard as much or more than the resulting ownership experience. Since completion of the restoration in late 2016, he’s driven the car less than 400 miles, and only shared it at local Cars and Coffee and show events.

Despite 1151’s incredible “preservation class” original condition in 2012, every nut and bolt was taken apart and put back together with arguably more care than that provided by the crew at the Cheshunt factory in 1959. Every part that should even potentially be replaced was, and always using correct or specially fabricated replacements. The original Coventry Climax FWE engine required no rebuild – at 33k original miles it had excellent compression and no leaks – but the timing chain system was upgraded, not because of issues, but preventatively. All of the wiring and electricals were taken apart and re-wired astutely. All of the rubber that could be replaced was replaced. The original steering wheel was refurbished (although a smaller, leather-wrapped one is currently installed and the flawless original wheel and hub are included) and the interior was completely and correctly re-upholstered. Following everything being taken apart, the body was completely stripped, prepped and repainted in the original Poppy Red by Costa’s Auto Works, a fiberglass paint and body specialist at a cost exceeding $25k. When the fit and finish weren’t quite right, the owner made sure it was done again to meet his exacting standards. Hours upon hours upon hours were spent on every possible section of this car, and while the pictures evidence a wonderful example, in person 1151 reads as truly special, a car that would undoubtedly be grin-inducing for Colin Chapman to see and drive.

Every phase of 1151’s life post 2012 has been documented – including its condition pre-restoration as well as photos and invoices incurred during restoration – in the multiple photo albums on this site’s Galleries page, and a brief video of the current driving experience in 1151 is also available for viewing.