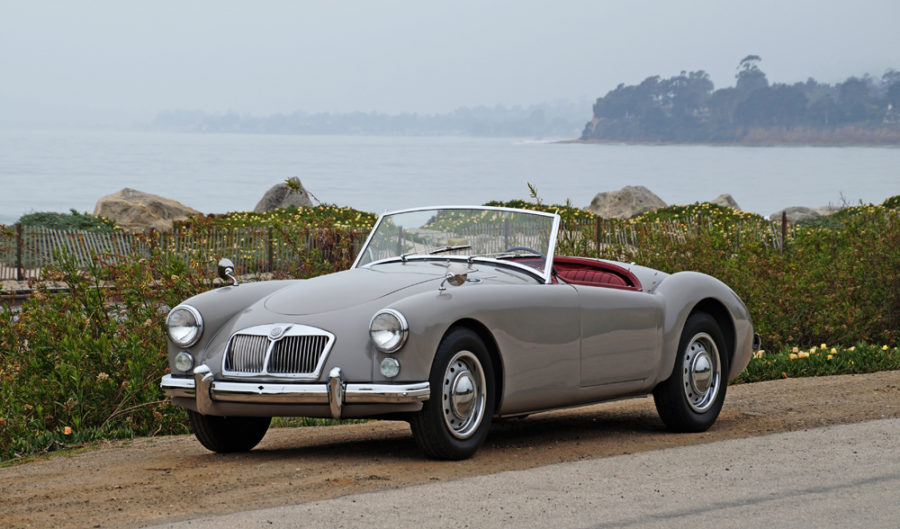 Offered for sale is a rare and absolutely stunning example of a completely restored, rust-free, final year MG MGA 1600 MK II Roadster, finished in tasteful and era-specific Dove Grey over a Red leather interior. Set apart by the distinctive recessed grill and horizontal tail lights, the 1962 MGA MKII is one of the most desirable models MG ever produced, something the car’s previous owner (a 40+ year MG enthusiast) had on his mind when he found this car in a barn more than a decade ago.

The body and undercarriage were exceptionally straight and rust-free, however the car had been put into the purgatory of long term storage due to the original 1600 engine spinning a bearing years before. Already the owner of completely correct, numbers matching, show quality MGAs, the previous owner decided that this “barn find” provided the perfect opportunity to completely restore a car to correct cosmetic specs, but improve upon the original mechanical configuration so as to make the car truly capable of extended (and spirited) highway driving, something that the car’s original engine and gearbox made somewhat cumbersome. That said, the original engine is available, is currently being rebuilt and could be swapped back into the car if you’re interested in having a numbers matching example.

The original engine was replaced with a five main bearing MGB 1800 engine, producing 95 horse power and favored by many MG enthusiasts for its more free revving ability. The cylinders have been bored 30 over, providing additional power that is bolstered by way of a mild road Kent camshaft. The engine has been entirely balanced with all new bearings, new oil pump, rebuilt distributor, etc. and the car has an early non-smog head and 1 ¾ SU Carburetors. The additional benefit of the MGB engine is a matching gearbox with overdrive, activated by the fog lamp switch and further allowing for improved motoring at higher speeds. With these tasteful, enthusiast-minded modifications, this is arguably the best-driving MGA on the market – a perfect blend of later model mechanical capability and iconic, far superior early model design aesthetics.

Speaking of which, the engine clearly wasn’t the only thing that received attention. The recipient of a thorough restoration, everything on this car was addressed by marque experts – from the undercarriage to the engine compartment, from the paint to the chrome, from the leather interior to the canvas soft-top. The result of these efforts is truly exceptional, easily making this one of the best MGA 1600 MK II’s available on the market. The paint is deep and lustrous, entirely consistent and marred only by the most negligible of imperfections (a rock chip here and there), accrued on drives to and from MG events over the last few years. The body is entirely straight, panel fit is good and the welting between panels was of course replaced during the restoration. All of the bright work and glass is excellent, as are the original steel wheels, wrapped in Dunlop tires with plenty of remaining tread. The car’s interior is virtually flawless and absolutely gorgeous, the lascivious red leather perfectly offsetting the understated Dove Gray finish. The full tonneau cover is in excellent condition, as are the side curtains, both stored is a spotless trunk that also houses the original spare tire,  jack and changing tools. The undercarriage is showroom flawless and as a car that was never rusty, it is entirely sound and correct.

This is an excellent opportunity to acquire a striking, top-notch, entirely restored and exceedingly desirable MGA 1600 Mark II and one that can be reliably and comfortably driven. It is as fine an example as we’ve ever seen and we know that whether it ends up in the hands of serious collector or just a weekend enthusiast who wants to take it to club-sponsored events now and then, its next owner will be as proud to own it as its prior.