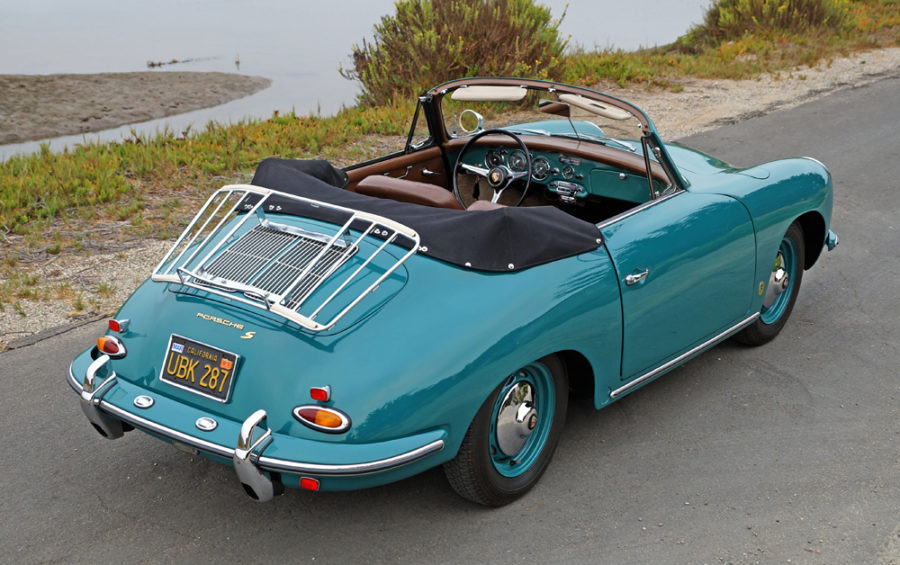 –  Chassis No. 155816
–  Engine No. 700659
–  Documented Original Numbers Matching 1600 Super
–  Rare, Signed, Early Porsche Certificate of Authenticity
–  Rare Original Color Combination of Smyrna Green over Original Brown Leather
–  DateStamped Color Matched Wheel
–  Original Sales Receipts From New
–  Rare, Valuable, and Complete Original Tool Kit with Porsche Inscribed Wrenches.
–  Original Manuals/Books/Service Receipts/Sales Brochures
–  Award Winning and Well Documented PCA Show Car Claiming over 30 Awards
–  Very Desirable T-6 Body Style with Twin Decklid Grilles
Offered for sale is an absolutely gorgeous, exceptionally original, award-winning, matching-numbers 1962 Porsche 356 B Super cabriolet in striking factory correct Smyrna Green over Brown leather seats. The 1600 Super was created as a high- performance option to the regular 1600, offering 15 more horsepower with larger valves, increased compression, and improved performance. Featuring the more sought-after T6 body style with twin-engine grilles on the deck lid, and an outside (rather than in the trunk) fuel filler, this best-of-the-breed 356 B 1600 Super is highly desirable. A well-loved example, the car presents wonderfully and has an extensively documented provenance.
On December 2, 1961, Richard Steppler walked into the Volkswagen—Porsche dealership owned by Dr. Guy Beretich in Pordenone, Italy, and bought himself an early Christmas present – this magnificent 356 B Porsche. Eventually Mr. Steppler passed the car to his nephew, Richard Kubacki, and it is known that the car stayed in Europe (primarily Munich, Germany, and Monte Carlo) until 1968, when it was shipped to Chicago. At some point the car was repainted silver and in 1988 it was purchased by its most recent owner (of 25 years) in Milwaukee with 79,000 miles on the clock.
Under his stewardship the car was systematically stripped and returned to its original color – the stunning Glasurit Syrmna Green you see it dressed in today, complete with wheels of the same color. The brakes were overhauled, the engine was gone through, and the top half of the motor was rebuilt with new heads so that the car could run on unleaded gas in the United States. Despite these vital improvements, the car’s originality was respectfully maintained and the car still has its original radio, luggage rack, date-stamped wheels, six-volt electrical system, and exceedingly rare and valuable complete tool kit with Porsche-inscribed wrenches. In addition, much of the interior of the car is as it was the day it left the factory with the same steering wheel, gently worn brown leather seats, headlights, dash panel knobs, and clock. The soft top has been freshly replaced with the correct German Happich material and the carpets have been correctly redone. The car’s undercarriage and battery box are immaculate and completely free of rust and the car is an absolute joy to drive.
Its unusual preservation and exquisite aesthetics made it a perennial favorite at car shows, allowing it to claim many first, second, and third place trophies, plus over 30 other award plaques, many of which came from Porsche Club of America events. The car also made appearances in An Eye for an Eye, a movie set in Chicago in 1991, as well as an advertisement for Cellular One.
This fully documented matching-numbers car comes with the rare, signed, early Porsche Certificate of Authenticity and the original sales receipt showing the purchase price from the dealership in Italy, with the Italian tax stamps dated 1961. Also included in the sale are boxes upon boxes of Porsche-stamped spare parts, the original boot cover (plus a traveling boot), Porsche car cover, trophies and awards, original Porsche sales brochures and the original owner’s manual.
The rare and original color combination, strong-running Super engine, popular T6 body, and legendary reliability make this exceptional, fully documented 356 B the perfect Porsche enthusiast’s choice, deserving of serious consideration from anyone in the market for an exceptional 356.