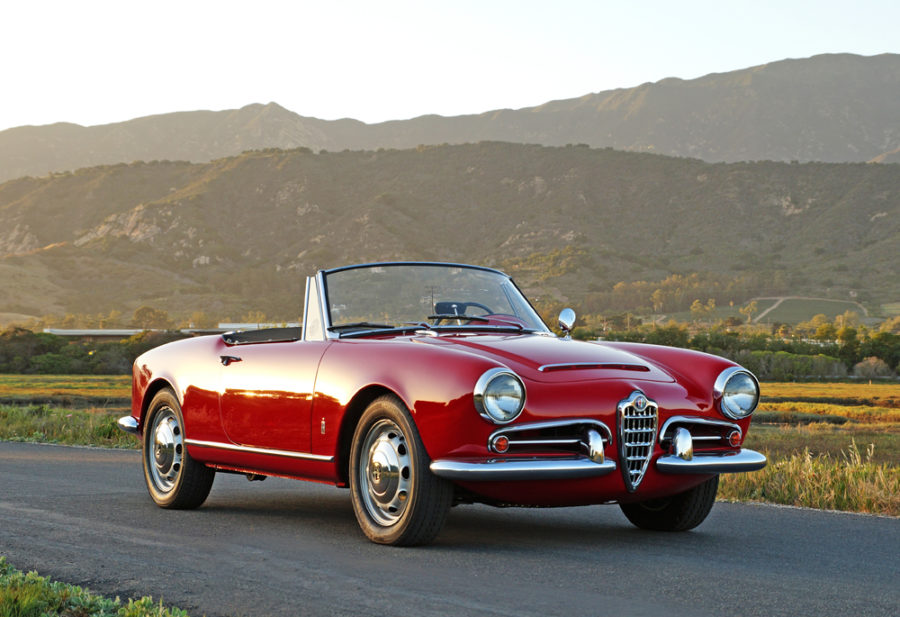 Offered for sale is an absolutely stunning, exceptionally well restored, all numbers matching, exceedingly rare and entirely rust-free California example of a 1965 Alfa Romeo Giulia Spider 1600 Veloce, finished in ever appropriate Red with a black leather interior. Correspondence with Marco Fazio (manager of Alfa Romeo Automobilismo Storico Centro Documentazione) confirms that this Giulia was manufactured on May 14th, 1965 with chassis number AR 390746 and engine number AR 00121*02322. Of the 10,318 Giulia Spiders produced, this is one of only 1,091 true factory Veloce specification cars.

As the pictures show, the car is truly striking; a beautifully restored example that is undoubtedly one of the finest true Giulia Spider Veloces in existence. While there are 24 pictures of the car here, we can send serious buyers links to more comprehensive photo albums (including photos prior to and during restoration) upon request.

Purchased new in Southern California by Cecil and Lillian Olson of Castro Valley, CA, they would own and love the car for nearly 40 years until his death, when it was bequeathed to their daughter Ynana. It was her aim to restore the car, but as often happens with many a well intentioned project, the Giulia sat in her garage for the better part of a decade before the realization that its restoration was beyond her prompted the sale of the car to one of its many local suitors in 2008. As such, this incredibly honest, numbers matching and correct example was one-family owned for 43 years and has always been a rust-free California car.

The lucky buyer was Rob Forbes, principal of Driveline Automotive Consulting in Redwood City, CA. Recognizing the incredibly rare, original and sound platform that he had on his hands, Mr. Forbes immediately set about comprehensively restoring the car, utilizing only the best suppliers and craftsmen in and around the Bay Area.

American Stripping Company of Sacramento, CA stripped the car to bare metal and primed it immediately to assure no underlying corrosion would occur prior to body and paint work. The media blasting revealed a poor repair to the nose at some point in the car’s past, so Frank Zucchi of FZ Restorations in Livermore, CA sourced an untouched original nose section and his father Arnold expertly cut out and replaced the damaged metal. A superb Swiss-Italian metal worker, Arnold’s work also included the fitting of correct trim “eyebrows”, grill and grill bar and it is truly exceptional – were there not photographs documenting the complete restoration, we’d never have known that any metal work had been performed. Aside from the nose, the body was extremely straight, original and free of any corrosion, allowing for the gorgeous paintwork performed by FZ Restorations to truly with a mirror finish. Frank blocked and primed the car at least four times, followed by a single stage urethane paint job using high-grade Nason paint. The body was painted in its entirety with the doors, hood and trunk removed and then reassembled to ensure that no paint seams occurred in the jams. All of the brightwork was either re-chromed or replaced using factory correct parts.

The interior was entirely reupholstered by Hugo Sanchez of Sids’s Upholstery in Mountain View, CA. The seat foam rubber was all replaced and the seats themselves were covered in full leather with matching vinyl door cards. The carpet is all Wilton wool, with the exception of the correct original rubber Alfa mats. The soft top was replaced in European Stayfast canvas and the tonneau cover was custom made in the same material using the original as a template. When looking at the dash, Alfistis will notice that liberty was taken from stock during restoration due to personal preference. 101 Giulia Spiders have an unattractive vinyl padded dash top. Mr. Forbes preferred the clean painted look of the earlier Giulietta 750 cars, so he sourced Giulietta 750 metal edge trim and had it painted crinkle black to match the steering column. FZ Restoration block finished and painted the top of the dash to match the dash fascia and Sid’s made a bead of vinyl to provide a seam between the dash nose edge and the red dash top…just like the 750 cars. We’re inclined to agree with Mr. Forbes on this configuration’s superior aesthetics, however, if complete originality is the next owner’s preference, any upholsterer could easily fix a padded dash pad and cover the leading edge.

The instrument lenses were taken apart and their faces were thoroughly cleaned. A local silk screen company created new lettering for the plastic insert ring on two of the instruments to get rid of the yellowed instrument look that comes with time and all three outer chrome trim rings were replaced. The ignition switch was replaced, but the rest of the knobs and pulls are original.

The wiring loom is also original, with countless hours spent cleaning and rewrapping and replacing the fittings and wire. The heater core and wiper motor were tested to ensure correct functionality before being installed and all exterior lights were completely disassembled, cleaned and fitted with new bulbs and rubber. The tail light lenses had faded such that they required replacement, but the license plate lights are original, as are front indicator lights and the interior light under the glove box.

The original, numbers matching engine was entirely rebuilt by Tony Guinasso of Auto Scientific in Belmont, CA. Both original Weber carburetors were also rebuilt and the pistons, cylinder set, Hastings rings, bearings, chains, valves, guides, seats, valve springs, dowel rings, timing cover studs, clutch disc, pressure plate and release bearing were all replaced with new correct parts. The flywheel was surfaced, the crankshaft was nitrated and great care was taken to completely clean all passageways in the engine and to drill out the crank oil galley plugs, replacing them with drilled and tapped set screws. The little edges or seats where the o-rings fit below the cylinders in the block were machined and the block decked to maintain correct clearances to the head. The water pump was replaced, a new fan was installed, and an alternator was sourced to replace the generator and brackets were made to affix it to block (although the original generator can be delivered with the car). Valve lash specs for intake and exhaust valve adjustment clearances are etch-marked on the cams themselves, making it easy for the next owner’s mechanic to adjust the clearances in the future. The original stock headers/manifolds were Jet-Coated in a black tone to inhibit corrosion inside and out. The exhaust and mufflers were replaced from the headers back and all new rubber hangers were fitted.

Upon completion of the rebuild, the engine was run on a dynamometer by Gerard Raney of Cal Dyno in San Carlos, CA. Corrected for temperature and density, the peak horsepower was 119 at 6500 rpm and torque was very linear, ranging from 82 pound feet at 3000 rpm to 101 pound feet at 5800 rpm. Oil pressure ranged from 66 to 74 lbs., however that was dialed back to a maximum of 65 lbs. The radiator was rebuilt and pressure tested by Howard Avenue Radiator in San Carlos, CA and the gas tank was inspected and cleaned. A new, correct Giulia Veloce heater valve was sourced and quality steel reinforced hoses were installed for the complex and tight bends up near the firewall.

The transmission was completely rebuilt by Dan Marvin of Alfa Parts/Norman Racing Group in Berkeley, CA. The original Dentek synchros were replaced with carbon moly synchros from a 105 Series gearbox, assuring more modern Alfa internals while retaining the 101 Series transmission case original to the car. Similarly, the fifth gear bronze bushing was machined out and replaced with the roller needle bearing of later-style Alfa transmissions to get rid of the chronic fifth gear whine/rattle typical to 101 Series gearboxes. The gears were drilled, lightened and balanced so that the synchros would spin up the gears easily to match speed more readily on gear changes. SWEPCO gear oil was used and the Guibo driveshaft donut was replaced. To improve the clutch geometry and smooth its actuation, Auto Scientific also re-bushed the clutch arm linkage under the car and inserted a grease nipple to ensure that the hinged part can be easily greased. They also designed and machined a modern style receptacle and housing for a spin-on type oil filter. Care was taken to ensure that the alternator and oil filter receiver could be retro-fitted back to the original generator and cartridge filters, if visual authenticity were to be desired in the engine bay.

The brake calipers were disassembled, honed and rebuilt with new stainless pistons and seals by Auto Scientific. The master cylinder was replaced, as was one rear wheel cylinder; the other was good. All the flex brake lines, the rear parking brake cable, the rear brake linings and the front pucks were all replaced and the bearings were re-greased and checked. The rear suspension bushings were all replaced, as was one tie rod end in front. The front bushings were in good condition as were the shock absorbers, and consequently they were not replaced. The front springs were replaced with slightly stiffer and lower springs from stock and the rear springs were modified to achieve level ride height. Finally, the car was fitted with new Vredrestein ‘75/70/15 Sprint Classic tires.

When the car was finally finished, Mr. Forbes sold the car to one of our long-time clients, a discerning local collector who added it to his significant stable after spending more than five years looking for the right car. Since his purchase the car has been driven sparingly and only locally and, because of his discriminating nature, he had his own mechanic go through everything to make sure the car was to the incredibly high level he required. All subsequent work was performed by Roy Miller of East West Motors here in Santa Barbara. Semi-retired with more than 40 years of experience working on European marques of the era, Mr. Miller is also a Pebble Beach Concours d’Elegance preservation class judge and the chief judge at the Palos Verdes Concour. Needless to say, he’s been entirely through the car and gives it his full blessing, both mechanically and in terms of its restoration quality.

Unfortunately for the owner, a series of necessary surgeries and the resulting inability to drive low slung cars over the ensuing two plus years has caused him to consider selling part of his collection, including this outstanding Giulia, but it’s also worth noting that this is not a fire sale and consequently the car is listed at a market appropriate price. Both RM Auctions and Gooding and Co. have expressed interest in including the car in their Pebble Beach week sales in August, but it will be privately available for sale (without a buyer’s commission) through July 1st.