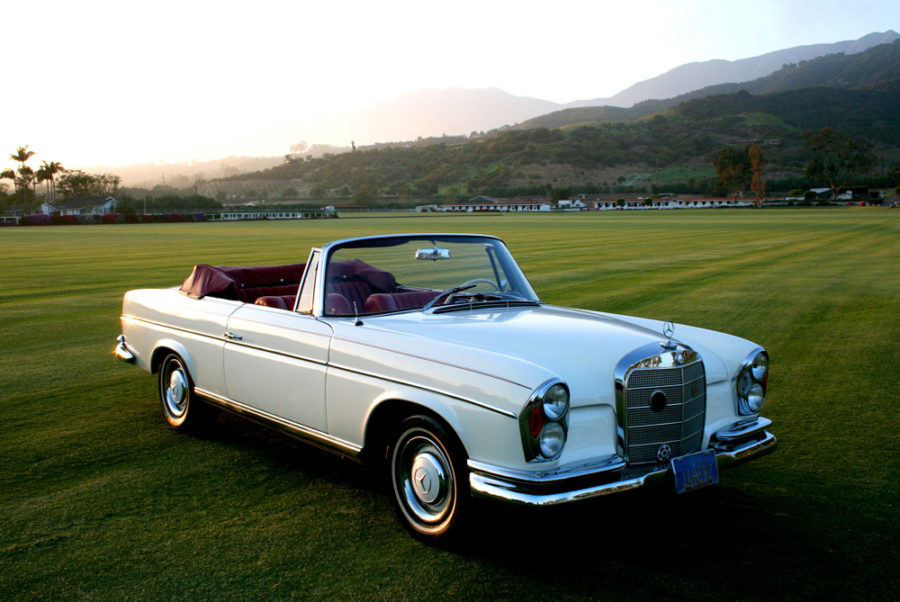 Offered for sale is a stunning, ultra low mile, rare 4-spd example of an early 1965 Mercedes-Benz 250SE Cabriolet with a truly unique ownership history. Finished in gorgeous correct Mercedes DB050 “Weiss” white paint over deep lipstick red leather, a black top and Makassar Ebony wood, this European version cabriolet was at one time owned by legendary television and film star Clint Eastwood. Always used sparingly as a secondary car, its 85,500 kilometers (53,000 miles) have been certified original and the car is completely free of rust or accident damage. If you’ve been looking for a stunning example of a W111 cabriolet with a completely unique provenance, this car deserves your serious consideration.

The car was originally purchased in Germany by Elliot Kastner through his company Wincast Film Productions, Ltd. Kastner was a notable American producer in the 1960’s and 70’s who centered his operations in Europe out of his Pinewood Studios offices outside of London. He also maintained a home on the French Riviera, which is where this car was originally kept and driven when Kastner was in residence.

In 1968 Kastner began pre-production on what would become 1969’s Where Eagles Dare, for which he’d been able to attach Richard Burton and an up and coming Clint Eastwood in the starring roles. A significant portion of the film was to be shot on location in Austria and Kastner had the car shipped there for his personal use during production. It was here where Eastwood first came into contact with the cabriolet, and he subsequently revealed to Kastner his admiration for the car.

Upon wrapping principal photography, Kastner invited much of the cast and crew back to the South of France, where he had a big surprise in store for Eastwood. Having developed a close relationship with the actor throughout the process, Kastner gave him the car just a few days before Eastwood was scheduled to leave.

No doubt delighted with the gift, Eastwood had the car shipped back to California, where it entered the Port of Long Beach on July 8th, 1968. He kept and used the car for a significant period of time, bringing it with him when he moved his primary residence from Los Angeles to Carmel By The Sea, near Monterey, California. At some point in 1976, in trade for a new vehicle, Eastwood had a proxy turn the car in to a local dealership, Monterey Airport Motors, which is where the third owner, a Napa Valley attorney, purchased the car as a gift for his wife.

The attorney already had a W111 cabriolet, a 1969 280SE finished in the same colors. As such, before giving her the car, he ordered customized vanity license plates for both of the cars. His read “14HIM” (one for him), and, because the cars were essentially matching, hers read “14HER2” (one for her, too). These blue and yellow plates still remain on the car today. The attorney and his wife kept the car for more than thirty years, deciding to sell it in 2007 due to her declining health. We were fortunate enough to come across the car through a mutual friend of the couple’s son and flew up to look at the car as soon as we heard about it.

As both his and (especially) her cabriolets were used as secondary weekend cars, the car had always been garaged and hardly driven throughout their ownership. Therefore, although somewhat weathered, we found the car in remarkably clean condition – and most notably, completely free of rust. Consequently, we set about bringing it back to its original grandeur – having it gone through mechanically, repairing and re-chroming the original bumpers and trim and removing and refinishing the gorgeous Makassar Ebony wood dash and window surrounds. If you’ll permit a moment of immodesty, the results of our efforts are nothing short of stunning.

The car’s exterior is immaculate, it’s correct DB050 “Weiss” white paint in remarkable condition, retaining astonishing depth and luster and free of surface rust, dents, scratches or any other significant imperfections. The chrome is exceptional, almost entirely new and free of significant pitting, rust or dents. The rubber is all in good condition, as is the glass, which is free of cracks, scratches or rock chips. The black convertible top is free of wear or holes, has a new, crystal clear rear window and an immaculate matching red tonneau cover.  The original color matched wheels are in excellent condition and are wrapped in white wall tires with plenty of remaining tread.

The car’s interior is equally clean, its gorgeous original deep red leather seats free of tears or separated stitching and showing only the most minimal of wear. All of the interior trim, plastic and panels are in excellent condition and the headliner is free of wear and tear. All of the knobs and buttons function as they should and the rare Becker Grand Prix radio is in excellent condition. The wood dash is truly remarkable: glossy, flawless and luxurious to the point of near overindulgence. Refinished in its correct original dark stain by the craftsmen at the world famous Madera Concepts at a cost of more than $4,000.00, the wood is as fine as any we’ve ever seen, including that of show quality vintage Jaguar’s, Rolls Royce’s, etc.

Despite it’s charge as a weekend driver, the car comes complete with a bevy of service documents showing meticulous care. This fact, coupled with the car’s incredibly low original mileage, makes for a drive quality better than any other 250SE we’ve ever had the pleasure of driving. Starting right up without any smoke or hesitation, the car idles smoothly and consistently at the correct revolution level. When driving, the car is completely responsive, the engine pulling strongly as the car shifts smoothly through each of the manual transmission’s gears. The fit and gaps are consistent and correct and, perhaps most importantly, the car’s panels and undercarriage are completely free of rust or evidence of significant accident repairs. As such, the car drives and stops completely straight, without any irregular shudders or vibrations.

The cab is a complete joy to drive, whether tooling around town with the top down or cruising down the highway at speed. And, as anyone familiar with the W111 cabs will attest to, the car brings as much joy to others as it does it’s driver; not a single outing goes by without admirers stopping to photograph the car, giving a “thumbs up” or smiling and pointing the car out to their companions.

The W111 coupes and cabriolets were classics the day they were introduced in 1961 and their ever-increasing value has reflected the continued appreciation of the model more than forty years after its initial build. They are the last of the truly hand-built Mercedes, with only 13 cars per week rolling off the line. The 250SE cabriolet was only built between 1965 and 1967 with only 2,105 units produced. With 3.5 Cabriolet prices having risen to nearly unattainable levels, any W111 is a good investment, however an immaculate, low mile, example with a provenance as unique as this is an undeniably exceptional opportunity.