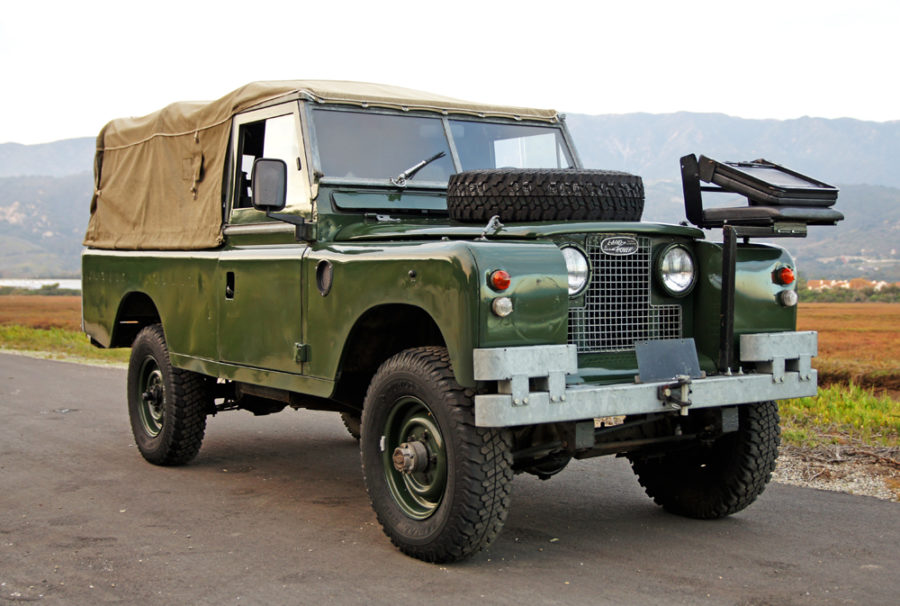 Offered for sale is a wonderfully original, fantastically presented, rust-free and mechanically sound 1966 Land Rover Series IIA 109 (LWB) with loads of desirable upgrades. Originally a British Military vehicle, it was imported from England by Rovers North in the late 1990s, eventually finding its way to the Los Angeles area where it was owned by a Land Rover enthusiast who outfitted it with some appropriate upgrades including parabolic springs and a Rocky Mountain Overdrive unit. Without knowing better, the truck has the look of a Series IIA that was specifically prepared by a Hollywood production designer for the most recent Indiana Jones film – it has an incredibly charming level of patina throughout, consistent with it’s well-cared-for history. A favourite at local shows and events, the truck never ceases to get smiles and thumbs-ups from other motorists and passersby.

The Series IIA is widely regarded as the most enduring Series model constructed, both in terms of its mechanical and physical ruggedness and the perception the public has of the Land Rover marque in general. In the 1960s dozens of films and documentaries showed the western world far away locales for the first time, almost always made accessible by someone driving a Series IIA. In many ways, it was during this period that Land Rover built it’s continuing legacy in the public’s mind and this IIA is the perfect representation of that. It’s also one of the last years that Land Rover retained its early iconic headlamps on either side of the radiator.

In 1967 Land Rover introduced the 2.6 Litre Petrol Inline 6 Cylinder engine to outfit their NADA (North American Dollar Area) trucks. This engine was widely decried as an unsuccessful variant, causing Land Rover to cease importing 109s to the U.S. altogether. This IIA is the last 109 to employ the desirable tried, true and battle tested (in some cases literally) 2 ¼ Litre Petrol 4 cylinder. The engine starts, idles and runs beautifully without any indication of overheating, the high, neutral and low ranges all work and the 4-speed manual transmission shifts crisply through each of the gears. The standard transmission is assisted by a rare, fully functional Rocky Mountain Overdrive unit that allows for cruising in the 60-65 mph range. Startlingly, this effectively means that the truck has 12 distinct forward gears. The drive quality is excellent, aided by locking Warn Hubs and Old Man Emu shock absorbers. If you’re new to the vintage Land Rover experience, I’m sure a quick perusal of any online Land Rover forum or a call to your local vintage mechanic will confirm that all of these upgrades are extremely desirable (and quite expensive). They also speak to the level of enthusiasm and care with which the previous owner regarded this Series IIA.

Aesthetically the truck looks fantastic. Sure, there are little nicks, soft dings and overall wear to the body and finish, but in our (and many others’) view this is the only appropriate way for a vintage Landy like this to be presented. The patina is consistent throughout and the truck remains astonishingly original, right down to the undercarriage, which shows some older flaking undercoating but absolutely no rust whatsoever. The frame rails and pans are all in excellent condition, as are the heavy-duty galvanized bumpers at the front and rear. The canvas and rope soft top is in fantastic original condition and accents the iconic military green exterior perfectly. The interior is also in great original condition, bearing the same patina as the truck’s exterior. The dash is clean and straight forward with working gauges and switches, the rubberized floor is excellent and vinyl interior panels show only negligible wear. The grey vinyl Defender seats are in great shape and are adjacent to a functional Tuffy lock-box center console with arm rest. The rear bed is in similar condition and is equipped with a removable rear bench and two lockable storage compartments that can double as additional seating in a pinch. Lastly, a Cariers shovel and pick are fitted to the tailgate, a full spare tyre is mounted to the bonnet and a removable safari style spotting seat is mounted to the front bumper and driver side front fender.

This is a rare opportunity to acquire an iconic, aesthetically charming, rust-free and mechanically sound original LHD Series IIA 109 Land Rover, outfitted with a number of desirable upgrades. The truck’s been looked over by our local vintage Land Rover mechanic (with 40+ years experience) and he’s concurred with our original assessment: it is uncommon to find an example in comparable condition that has been so obviously well looked after.