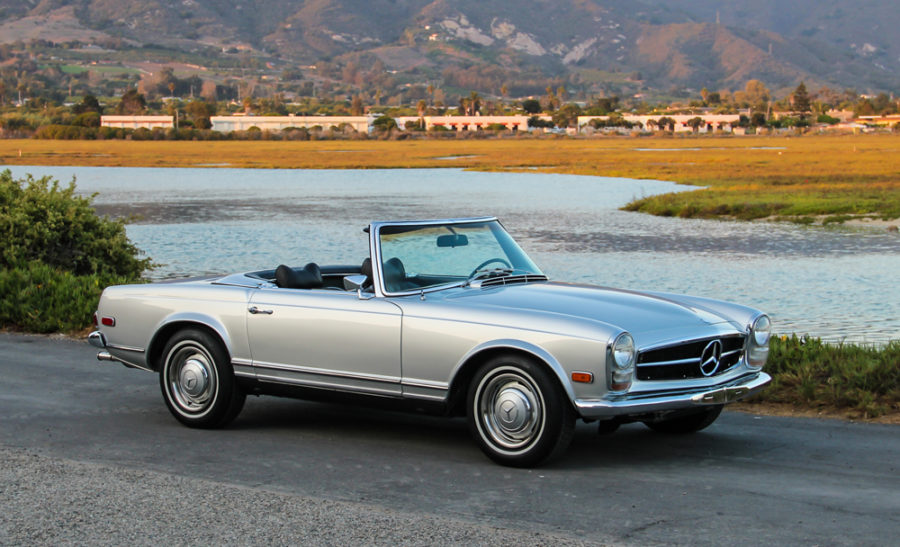 Offered for sale is an exceptionally beautiful, mechanically strong and entirely solid 1968 Mercedes-Benz 250SL finished in ever-desirable Silver Grey (DB 180) over a black interior and fitted from the factory with the exceedingly rare Limited Slip Differential option. A special order car delivered new on September 4th, 1967 to Mrs. Henriette Sekel of Berliner Str. 29, Frankfurt, it would spend less than a week in Germany before being driven to the Sekel family’s vacation home in Nice, France at the very end of the 1967 season.

It would remain in Southern France as a holiday car until the summer of 1975, when a vacationing American couple acquainted with the Sekels took a fancy to the car and purchased it on the spot. Importing, federalizing and shipping the 250SL to their home in Bakersfield, CA, they would own it until the mid 2000s, at which point the car was sold to a couple in Porter Ranch, CA, a suburb of Los Angeles. The third owners would own the car until a few short years ago, eventually selling to its current owner, a well known gallery owner and business with homes in Palm Spring, Beverly Hills and Montecito.

It was last summer in Montecito that we came across this lovely example, and we immediately fell in love with it. After hounding the owner with offers for the better part of the year, we received a phone call from him last week asking us to sell part of his collection, including this 250SL, a 1971 Mercedes-Benz 280SE 3.5 and 1963 Mercedes-Benz 220SE Cabriolet with rare Bucket Seats. For those interested in either of these cars, they’ll all be offered in the next week or two following some mechanical sorting.

The 250SL’s finish is striking, entirely consistent, lustrous and deep, contrary to the muddy finish layered on so many 1960’s era Silver Grey Mercedes cars. The car’s body is entirely straight, retaining factory correct and consistent panel fits and gaps throughout. This is not a show car, but flaws are few and far between and the pictures accurately represent the car’s gorgeous condition, including the unblemished bumpers, trim and original glass. The car’s undercarriage is exemplary, owed entirely to its well cared for, dry California existence.

The car’s interior is equally as beautiful, the seats, interior panels, gorgeous wood trim and carpets all professionally reupholstered by the current owner, and the dash housing its original Becker radio. That said, due to the owner’s respect of the original dash, a fully removable modern CD/Radio/AUX system has been ingeniously added underneath the dash, leaving the original unit intact. The car’s factory correct black German canvas soft top shows only minimal wear and retains a clear rear window, and the car’s original hard top having been reconditioned such that it looks exactly as it did leaving the factory.

The car is also excellent mechanically, the original 2.5L engine starting effortlessly, idling consistently and pulling strongly and smoothly through the automatic transmission’s gears with excellent and even compression across all cylinders. Having enjoyed the car on a recent jaunt up into the Santa Ynez Valley, I can report that the car performed beautifully despite extremely high temperatures, the engine running strong and cool, the incredibly rare limited slip differential aiding the car in the steep climb, the brakes and suspension tight and strong and the ride quality entirely comfortable, whether tooling around town, winding through the canyons or bombing down the highway.

The Mercedes-Benz 250SL was a vast improvement to its 230SL predecessor and was certainly the rarest of the Pagodas, making up less than 11% of the W113 production run. If you’re looking for a beautiful, entirely solid and mechanically sound 250SL, this car deserves your serious consideration. Finished in a desirable livery and fitted with the rare limited slip differential, this is a wonderful example that’s sure to appreciate and offer years of enjoyable and trustworthy service.