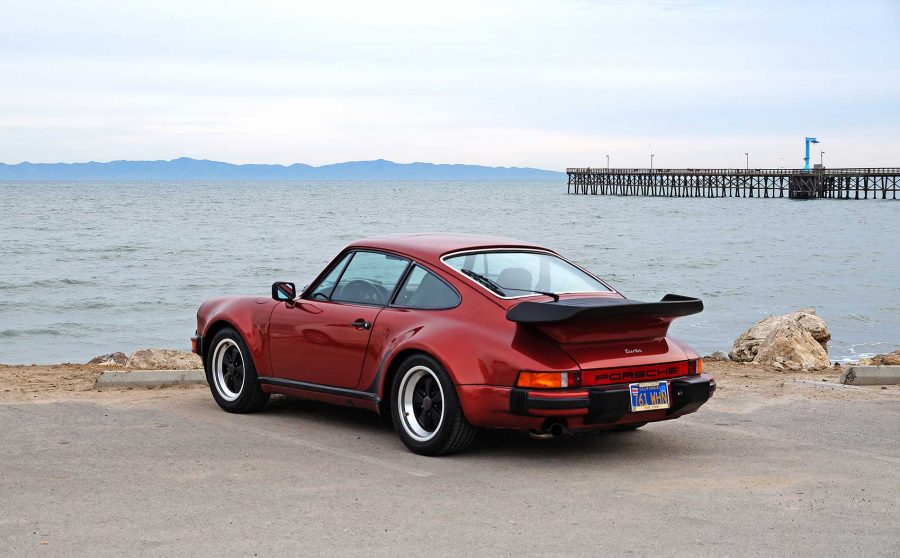 Always in Santa Barbara, this two owner 1978 930 has just 25k miles, extensive documentation, a completely rebuilt engine by Schneider Autohaus less than 200 miles ago and is one of only three finished in Sienna Metallic. Sold on Bring A Trailer Auctions for $123,000.

This 1978 Porsche 930 Turbo is a two-owner example that has remained in California since new and is finished in paint-to-sample Diamant Sarah (Sienna Metallic). The car was sold new at Trans World Motors in Goleta, California and was purchased by the current owner in 1981. The odometer now shows just 25k miles, and factory equipment includes a black leather upholstery, sport seats, a power sunroof, and a limited-slip differential. Power is from a matching-numbers turbocharged 3.3-liter flat-six, which is paired with the original 4-speed manual transaxle. Fewer than 100 miles have been added since a $27k engine rebuild was performed by Schneider Autohaus of Santa Barbara in 2013. Maintenance carried out in late 2018 and earlier this year included fluid changes, a tune-up, installing a new battery, and mounting four new Pirelli tires. This 930 has service records dating back to 1981, the factory books, a Porsche Production Specifications certificate, and a clear California title.

It is believed that only a few 930s were delivered in 1978 finished in paint-to-sample Sienna Metallic/Diamant Sarah. This example has remained in the Santa Barbara area since new and has  always been garage kept.

A few chips and sections of touch-up are present on the nose and leading surfaces as shown up close in the gallery below. Minor paint imperfections are also noted on the passenger side along with one on the sunroof. Note the 6-digit California blue plates and Porsche club stickers.

The car is equipped with headlamp washers, a rear window wiper, and covers on the sideview mirrors. A brake fluid flush was performed during the 2018 service, at which point four new Pirelli P Zero Rosso tires were installed on the 16” Fuchs alloy wheels. Each corner is shown up close in the gallery.

The black leather interior came optioned with sport seats from the factory, as well as a matching black headliner and a power sunroof. Noted issues include a split in the passenger-side rear seat cushion and distortion in the dash. The windshield washers are currently inoperable and the A/C system does not currently blow cold.

Approximately 25,250 miles are shown on the 6-digit odometer. 21k miles are reported to have been added by the first owner between November 1978 and July 1981. The current owner added just over 4k miles between 1981 and 2014, when medical issues forced him to place the car in storage, where it remained until 2018.

The turbocharged and intercooled 3.3L flat-six has been serviced by Schneider Autohaus since 1978. An engine rebuild was prompted by a seized camshaft lobe in 2013. Work included reconditioning both cylinder heads with new valves and exhaust guides, as well as installing new main bearings, a resized crankshaft, piston rings, and resized connecting rods. A new oil cooler was fitted at this time along with a remanufactured turbocharger from TurboKraft. The invoice from this service with the mechanic’s notes can be viewed in the gallery below, and under 100 miles have been added since the work was completed.

Power is routed through the original 4-speed transaxle, which is equipped with a factory limited-slip differential. Additional lift photos have been provided in the gallery below.

Stampings for engine *6881114* and transaxle #7780862 are confirmed as numbers matching by the included Porsche Production Specifications certificate, which can be viewed in the gallery below.

The original warranty book and owner’s manual accompany the sale, along with older California registration receipts. In the front compartment, one will find the factory space-saver spare, jack, and tool pouch.