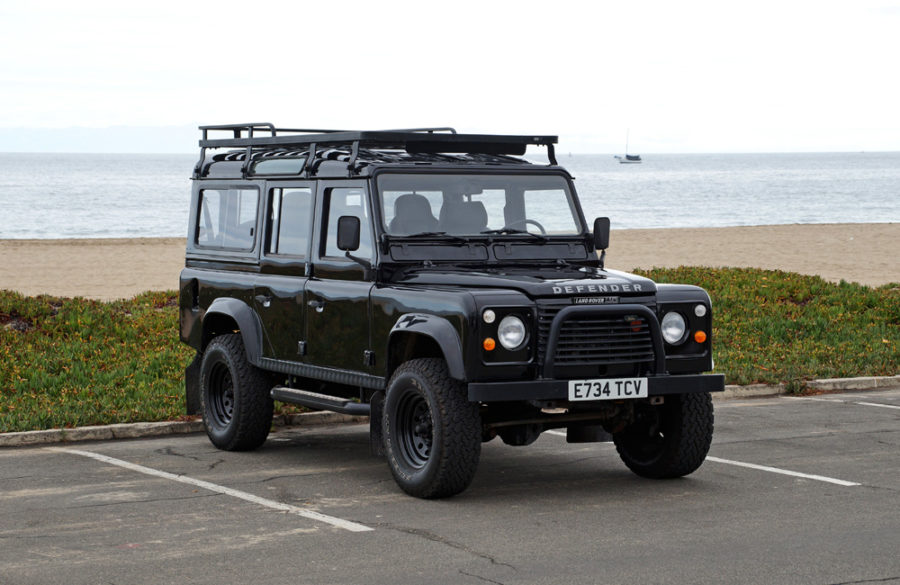 Defender 110 LHD finished in ominous Black over a Black Exmoor Leather interior and fully licensed and registered in California (which is considerably rare in this state).

Offered for sale is a 1987 Land Rover Defender 110 LHD (Left Hand Drive) finished in ominous Black over a Black Exmoor Leather interior and fully licensed and registered in California (which is considerably rare in this state). The truck was restored in the UK and imported legally to the US a few years ago and since that time has been enjoyed sparingly by the current owner here in Santa Barbara, always cared for and maintained. Fitted with its original 2.5L 4 Cylinder diesel engine, the chassis and engine are believed to have traveled a mere 34k km from new. The engine starts effortlessly, idling consistently and pulling strongly and smoothly through each of the 5-speed transmission’s gears. Road manners are exactly what one would expect of D110, the truck driving and braking straight, behaving with civility on the highway, but always capable of going well off the beaten path.

The car’s exterior is straight and correct, cloaked by a black finish that, as the pictures show, remains entirely presentable, but is marred by a number of imperfections (cracks, chips, etc.). That said, in our (and many others’) view, this is entirely appropriate for a truck as resilient and storied as a Defender and for many owners would require no action, but we felt as though potential buyers should be made aware, as they aren’t readily apparent in the photographs. All of the glass and rubber is in excellent condition, as are the gutty black wheels, wrapped in General Grabber AT2 tires with plenty of remaining tread. The truck’s undercarriage is entirely solid and original, showing no evidence of any structural rust or rust repair and the engine compartment remains clean and unadulterated.

At the time of restoration the truck’s interior was entirely reupholstered with beautiful black Exmoor leather seats, black carpeting and a flawless headliner. The interior panels and dash are both clean and correct, as is the truck’s cargo area, where folding leather bucket seats extend the seating capacity to 7, but also allow for practical storage. The dash has been fitted with a removable sound system that includes an auxiliary device plug in and charging cord. Other accessories include (but are not limited to) a recent tow package and “Expedition” style roof rack, roof rack access ladder, running boards, a rear compartment access step and a half brush guard front bumper. The truck also comes with an original owner’s manual, as well as multiple keys and CA registration good through May 2017.

This is an uncommon opportunity to acquire a very clean, entirely solid, mechanically strong LHD Land Rover Defender 110 diesel that’s been legally imported and is fully registered in California. Based on their iconic status, legendary capability and their rarity here in the States – especially in CA – the values of LHD 110s have gone up dramatically over the last five years. Offered at a much more realistic price than many of its competitors, this rugged example is sure to bring its next owner years of reliable service and enjoyment.