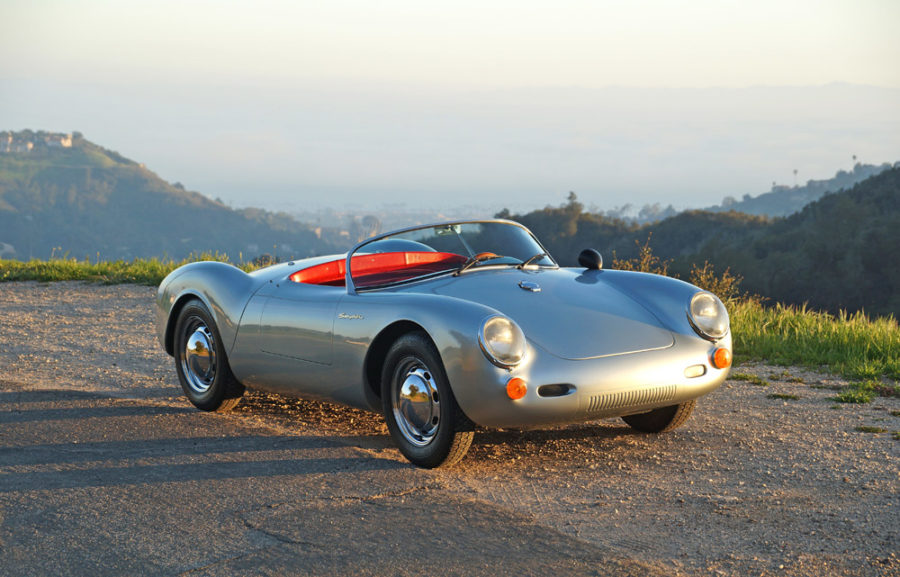 Offered for sale is an absolutely gorgeous, early construction Charles Beck Development, Inc. Porsche 550 Spyder replica (Factory Chassis No. 0007B) with just 34 original kilometers (24 orig. miles) on the drivetrain, body and chassis and finished in ever-appropriate Silver over Red. Never registered or titled, this car was purchased new from Beck Development in 1988 by a Santa Barbara doctor with an impressive personal car collection that would now be valued into the millions. The original owner worked with Chuck Beck directly to get the car dialed in to his personal specs and while he had intentions of using and enjoying the car, medical issues caused the car to be stored from new – and stored appropriately – hardly even broken in following delivery.

We’re now offering the car on behalf of the original owner’s trust in effectively brand new condition, part of the first batch of Beck’s Vintage 550 Spyders, widely considered to be the best engineered and most correct replica 550s on the market. Because it was never registered, titled or used, literally all of the miles (past Beck’s own test miles) that’ve been put on this car were done so by the local mechanic charged with reawakening the car’s mechanicals and on our test drive to and from the mountain roads where it was photographed.

As soon as we received the car from the owner’s trust, we immediately had the mechanicals completely sorted. Because the car was barely used and appropriately stored, the rebuilt 1915cc, 120 horsepower engine with desirable Dellorto carburetors came back to life without issue. Supplied by CB Performance Products when the owner bought the car from Beck in 1988, the engine starts effortlessly, idles consistently and pulls the car’s +/-1,300 lb. curb weight forward with grin-inducing force. With its lightweight fiberglass body, the Beck 3” tubular steel chassis provides excellent rigidity and the handling is superb. The car runs and brakes straight and true and the ride quality is as visceral as you’d expect, a true sports car experience if ever there was one.

Cosmetically the car is in excellent original condition, the silver finish cloaking the tight-fitting body, marred only by a couple of scratches on the top part of the passenger side door, likely occurring when someone moved something in the garage space where the car was stored for the last 30 years. We’ve documented it with a photo, but it is fairly difficult to see the damage, a very minor imperfection on an otherwise beautiful original example. The trim is in excellent condition, as is the windshield, and the four-lug wheels with hubcaps are flawless and wrapped in brand new tires. The car’s interior is equally as clean, the red seats, carpets and interior panels showing virtually no wear whatsoever. There is a very small nick in the vinyl padding directly behind where the passenger side door meets the rear fender, but that too is exceedingly minor. The car has period gauges and the Beck recommended steering wheel of the day, and it car comes with a removable soft top that’s likely never been installed.

Because it was never registered or titled, the car is being sold by the owner’s trust exactly as it was sold by Beck some 30 years ago: with a Manufacturer’s Statement of Origin, a Beck Invoice and a CB Performance Products invoice for the rebuilt engine. A bill of sale from the original owner’s trust will also be provided. Registration regulations vary from state to state, however getting the car titled and registered in California is a relatively easy process under State Bill SB-100, and considering how demanding CA’s state agencies are in general, it would stand to reason that registering the car in any U.S. state should be simple and straightforward. That being said, please research and confirm your state’s registration and titling process prior to committing to buy the car.

This is an excellent opportunity to acquire a gorgeous, mechanically strong, early construction example of Beck’s lauded Vintage 550 Spyder, essentially in NOS (new old stock) condition. Beck’s reputation for building the highest quality 550 replicas on the market has led their 550s to retain the most value, and while there are generally a number of them on the market, it’s likely that this is the most untouched original example in existence and deserves the serious consideration of anyone in the market for a Beck 550 Spyder.