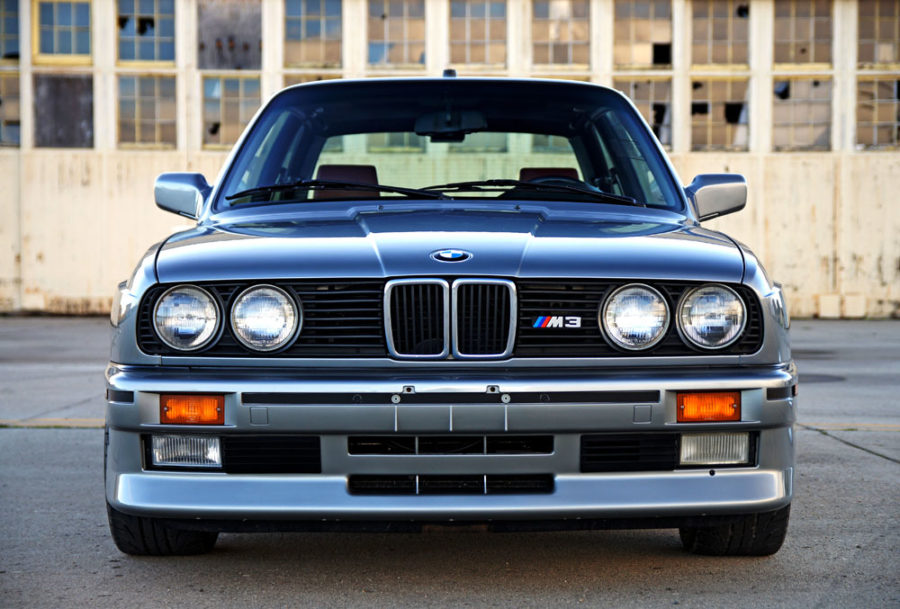 Offered for sale is an absolutely impeccable 1988 BMW E30 M3 with only 47k original miles and finished in rare and desirable Salmon Silver over Cardinal Red leather. In the mid-1980s BMW Motorsport had one goal in mind: to design and build a powerful, lightweight derivative of the 3 series that would dominate in FIA Group A racing. The first generation M3 was released in Europe in 1986, with distribution in the US following in 1988 and continuing worldwide until 1990.  In that period the car racked up thousands of victories, winning more races than any other single BMW model. Winning the European, German and World Touring championships, as well as the 24 Hours of Nurburgring and Spa, the E30 M3 is undeniably one of the most successful touring cars of all time.

The key to its success was an exceptional 2.3L four-Cylinder engine with a twin-cam four-valve head and Bosch fuel injection that produces 192 HP. Paired with the lightweight BMW Motorsports chassis, the engine pulls the car from 0-60 MPH in only 6.5 seconds with a thrilling 146 MPH top speed. Just one jaunt behind the wheel and it’s easy to understand why Automobile Magazine called the E30 M3 one of the “5 Greatest Driver’s Cars of All Time” and Car and Driver Magazine listed it as one of the “10 Cars to Drive Before You Die”. It is upon this car that BMW squarely based their claim of producing “The Ultimate Driving Machine”.

The car’s exterior is near flawless, the completely original paint marred only by a few of the most insignificant of rock chips, none of which detract from the car’s overall appeal or even appear in any of the pictures. The finish retains exceptional depth and luster and the body is factory straight with completely consistent panel fits and gaps. There are no door dings, no evidence of any body-work and absolutely no rust. All of the glass and rubber is in excellent original condition, as are the original wheels, wrapped in tires with plenty of remaining tread. The car’s interior is also completely original and equally as clean, showing only negligible wear. The leather exhibits the slightest patina: just enough to prove that the seats are original and have never been dyed, but not enough to undermine the allure of the rare Cardinal Red leather. The dash is flawless, as are the interior panels and headliner. Everything works as it should, including the original radio, trip computer and sunroof.

Mechanically the car is excellent. The current owner purchased the car out of a Southern California collection where it was dotingly cared for in a climate-controlled facility with a full time staff to ensure its proper maintenance. A full service was performed within the last 300 miles and the car couldn’t feel more tight and solid. The engine starts effortlessly, idling consistently and pulling strongly and smoothly through each of the gears. The sporty five-speed transmission shifts with consummate BMW precision, the car brakes straight and forcefully and the drive quality is pure sports car, leaving nothing to be desired. Whether tearing through the canyons, tooling through town or bombing down the highway, this E30 M3 is truly a driver’s car.

Between 1988 and 1990 only 4,996 US version cars were produced and because of their immediate popularity and incredible drive quality, a vast majority of them have been tracked, used as daily-drivers and just beaten up in general. Consequently, finding low mileage, virtually virginal examples is becoming increasingly difficult and values and auction results have continued to rise steadily. If you’re a serious BMW or German sports car collector, the E30 M3 is simply a car you must have, but it’s also the perfect car for the weekend enthusiast. Either way, this E30 M3 is as nice as you’ll find and deserves your serious consideration.