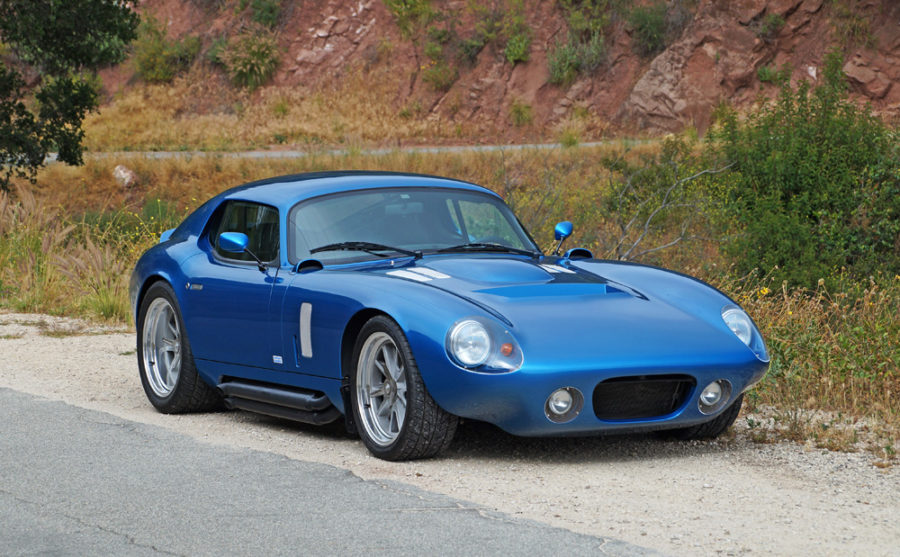 Absolutely gorgeous, practically virginal Shelby CSX 9000 Daytona Coupe, finished in iconic Guardsman Blue with a painted rear half cove. Completed in 2013, Chassis No. CSX9128 has traveled a mere 1,225 miles since completion and is California registered under the sought-after “SB-100”.

Offered for sale on consignment to Ride Quality Motors is an absolutely gorgeous, practically virginal Shelby CSX 9000 Daytona Coupe, finished in iconic Guardsman Blue with a painted rear half cove. Completed in 2013, Chassis No. CSX9128 has traveled a mere 1,225 miles since completion and is California registered under the sought-after “SB-100” Senate Bill, which means the car requires no smog certification for California registration. Painstakingly dialed in and fanatically cared-for by the original enthusiast father and son owners, the car was set up with a mild cam for reasonable street driving, but the second you engage the throttle it throws you back in your seat with grin-inducing force.

When researching CSX9128’s build, the owners became friends with Pete Brock, who subsequently helped guide them through the process. The car bears Brock’s badging and has been outfitted with a number of BRE (Brock Racing Enterprises) upgrades including a BRE Rear Window, BRE Rear View Mirrors and BRE Headlight and Driving Light Lenses. Brock’s signature appears on the glove box and in the engine compartment, along with the Shelby Engine Co. crew that completed the original build.

When most interested buyers consider a CSX9000 Daytona without having been through the often year-plus build process, they’re apt to believe they can get a quality fiberglass bodied example built exactly to their specs for the listed price on Shelby’s site, plus the drive-train and installation. That’s true to some extent, but to really get the car to perform to the level it’s capable of, to really provide a truly fulfilling driver experience, hours of additional tinkering and set-up are necessary. That’s something this car’s owners undertook with dedication – all of the research, work and dialing-in (let alone cost) has been handled, and the car not only performs exceptionally, but reliably. Words can’t adequately describe the experience from behind the wheel, but the car is in fantastic mechanical condition and everything, including the A/C and all the electricals, functions exactly as intended. Available records and receipts can be provided to serious buyers upon request.

Having logged only 1,225 miles from new in the care of meticulous owners, the car also is in unsurprisingly exceptional cosmetic condition. Enjoyed sparingly around the back roads of Santa Barbara and the East San Francisco Bay Area (where the father and son owners respectively live), the striking Guardsman Blue finish is pristine, marred only by negligible road wear on the lower part of the front valence and a small factory paint imperfection on the air-intake vent on the driver side cowl, all of which can be easily remedied. The glass, rubber, wheels, etc. are all flawless, and the same can be said of the car’s interior. The comfortable leather seats, dash, carpets and interior panels show virtually no wear, concurrent with what you’d expect of a 1,225 mile car.

The car comes with a battery tender, a knock off hammer (never used), a can of the original paint, two sets of keys, a car cover, California black vanity plates reading “CSX9128”, and complete documentation. To reiterate, the car is SB-100 registered in CA and all registration fees are paid – no weird out-of-state stories.

This is as close to a brand new CSX 9000 Shelby Cobra Daytona as you’ll find – at least without waiting upwards of a year and paying considerably more to have one built. Astutely and tastefully built, completely and correctly dialed in, a big savings in cost and, perhaps most importantly, no hassles or delay, especially if you want the car to be California registered. All the work’s been done to right specs at the highest level; all you’d need to do is turn the key and enjoy.