A brief conversation with Jesse Alexander 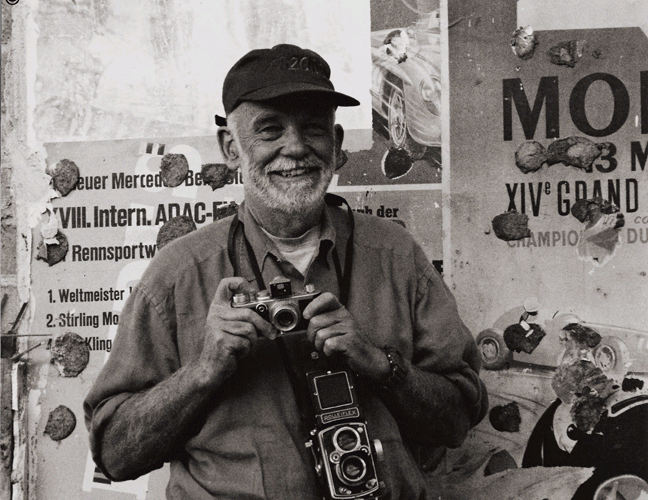 The automotive racing world is one that is dominated by big names with big talent: Shelby, McLaren, Andretti, Granatelli – you get the picture. But when it comes to pictures of this specific world, there is perhaps no bigger name and no bigger talent than Santa Barbara’s own Jesse Alexander. His indelible images have informed the world on the sport for more than half a century, gracing the pages of the world’s most notable automotive magazines, the ad campaigns of its most recognizable marques, as well as the walls of preeminent galleries, museums and private collections. Ride Quality Motors briefly sat down with the master photographer at his studio in Carpinteria. 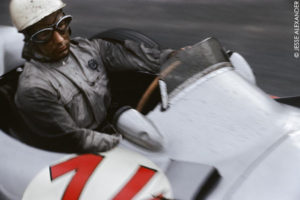 GRM: What inspired you into photography? Was it related to a love for automotive racing? Or was that an unrelated interest?

JA: I grew up during WWII and the pictures that appeared in the many news magazines of the day intrigued me. The imagery was fascinating, very strong and in many ways mimicked by the propaganda posters that were everywhere during the war.
As a kid my stepfather gave me a camera. My dad was an avid maker of home movies and, watching that self-expression, photography naturally became a way for me to express my own creativity.
And I’ve always loved cars. My dad had Packards and the evolution of design was always a fascination of mine, as it remains today. I am part of that crowd that has had an enduring “love affair” with the automobile. In the early 1950s, small sports cars like the MG and the Jaguar were beginning to be imported and I went out and bought an MG TD. My interest in the cars took me to many of the races on the West Coast: Pebble Beach, Golden Gate Park in San Francisco and, of course, Santa Barbara. I took lots of snaps at these races, and, in following the drivers, I got the urge to go down to Mexico and cover the famous Mexican Road Race in 1953. In 1954 I sailed to Europe with my wife and child and while exploring the continent with my camera in hand, I found myself in Reims on the 4th of July, photographing the French Grand Prix. I realized that this was what I really wanted to do with my life. So racing, cars, photography – they all came together and it really developed organically into a career.

GRM: Has your focus changed over the years, and if so, what subjects interest you now?

JA: Apart from digitizing my archive, my focus today is wildlife photography, particularly birds local to Santa Barbara. Until recently, my wife and I had a house at Sand Point, which backs up to the Carpinteria Salt Marsh. The shore birds that inhabited the beach and the marsh there became my focus and subject of my fascination. Subsequently, I’ve been interested in photographing the raptors (birds of prey) that can be seen up here on the Riviera where we are currently living, as well as at the Ojai Raptor Center, which is dedicated to the rehabilitation and release of injured or displaced birds. 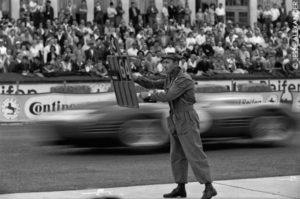 JA: Moving to Europe in 1954. It defined my career, indisputably changing my path in life as well as that of my family’s. Also worth noting, it’s been an incredible change to be able to work skillfully enough with the new photo-editing software out there like Adobe Photoshop. This opens up the options on even my early photographs and allows me to make a beautiful digital print.

GRM: What’s the thing that most often or most frequently brings a smile to your face?

JA: My family, of course. My wife Nancy, my dog Neville. Seeing the deer in our garden, or capturing an excellent shot, like an action shot of a hawk taking off from a telephone pole yesterday.

GRM: What’s the best advice you ever received?

JA: It probably came from my older brother Bob, who urged me to really look – not just photograph. So today I find myself looking harder than ever.

Alexander’s work can routinely be seen at the Patty Look Lewis Gallery, 25 E. de la Guerra Street. His books and posters are available at many major retailers, as well as from his website: www.jessealexander.com.