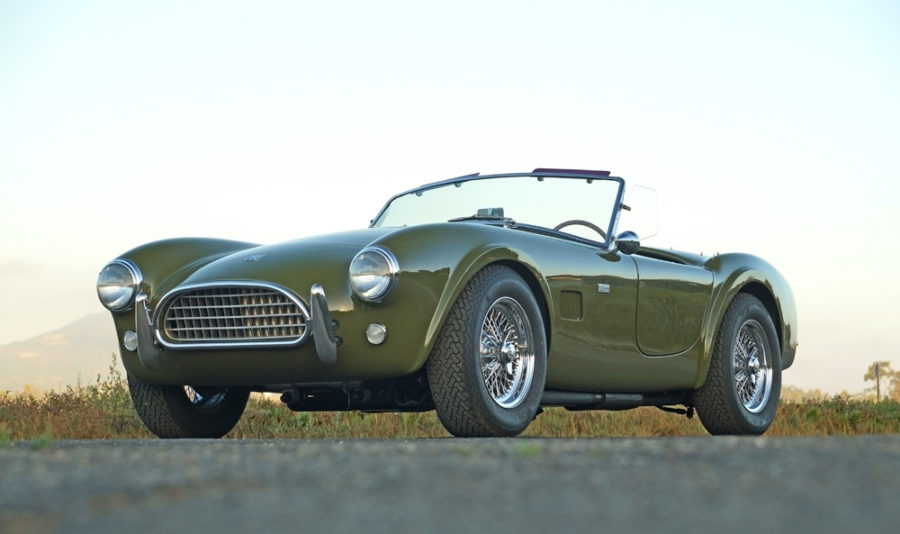 Absolutely stunning, virtually brand new 1964 AC/Shelby Cobra Slab Side built by exceptionally well regarded E.R.A. Replica Vehicles and fitted with a Ford 302 engine prepared by Hawaii Racing and a Tremec T-5 Transmission. Completed in July of 2014, the car has accrued a mere 311 miles since delivery.

Offered for sale is an absolutely stunning, virtually brand new 1964 AC Shelby Cobra Slab Side built by exceptionally well regarded E.R.A. Replica Vehicles in New Britain, Connecticut and fitted with a Ford 302 engine prepared by Hawaii Racing and a Tremec T-5 Transmission with a forward located shifter. Completed in July of this year, the car has been registered and titled in California through the SB-100 program and has accrued a mere 311 miles since its delivery. Delivered in July at a cost of over $100,000 following a nearly two year build process to the meticulous commissioning owner’s standards, the car is only now being offered due to an unforeseen health issue.

As one would expect of an effectively new example, the car is absolutely impeccable and entirely unique in its distinctive “Urban Green” finish, a special order BMW color. An exceptionally high quality paint job by E.R.A.‘s preferred painter, the finish is entirely deep, lustrous and consistent, beautifully cloaking E.R.A.‘s exceptionally well constructed and perfectly fit fiberglass body. All of the chrome, rubber and glass is manufacturer fresh and correctly installed and the car is fitted with Smiths electronic gauges, stunning Dunlop wire wheels, Blockley 205/70VR15 radial tires and AC badges on both the rear decklid and each of the wheel knockoffs. The car also comes with a black tonneau cover and a new California Car Covers fitted cover.

The car is an absolute joy mechanically, the Ford 302 engine starting effortlessly, idling consistently and pulling with incredible force through each of the excellent Tremec transmission’s gears. A vast majority of Cobras are fitted with either “crate” or “seasoned” engines, but this engine is a Ford factory built original. For those of you who are unfamiliar with these terms, a “seasoned” engine is used, typically pulled from another car, rebuilt and tested before delivery, but it typically remains unknown how many or what type of miles were put on the engine before being installed. A “crate” engine is one that has been built under license from the original manufacturer, and they are generally considered sub-par due to laxer production standards by licensees that are usually foreign, often from Mexico.

The car’s commissioning owner was dissatisfied with both of these options, so he went and sourced a true Ford factory-built 302 from a gentleman named Joe Souza, the owner of Hawaii Racing in Simi Valley, CA. In 1998, Mr. Souza purchased dozens of original Ford factory 302s before Ford ceased their own internal production. Consequently, the engine in this car is a true Ford engine, built by the factory to their original rigorous standards and personally prepared by Mr. Souza.. Per the commissioning owner’s specifications, the engine was set-up with a mild cam (noted as “old man cam” on Hawaii Racing’s invoice), which in our opinion is an appreciated departure from the rumbling, vibrating lion’s share of Cobras that, while effective in impressing pedestrians, can’t be comfortably driven for any significant distance or period of time. This is not the case with this example – I’d have no hesitation to take it up the coast to Pebble Beach – and although a more civilized set-up, the car’s 302 engine shouldn’t be underestimated. Producing +/- 300 horsepower and 300 lb. ft. of torque it rockets the incredibly light Slab Side body to impressive speeds when asked, emitting a truly grin-inducing exhaust note. Handling, braking and ride quality are excellent, rounding out a wonderfully visceral driving experience.

The commissioning owner couldn’t be happier with his experience and the finished product. As such, the car is being consigned with reluctance, but he has determined that it would be better for someone to truly enjoy the car in its virginal state than for it to sit unexercised for the better part of a year while he is recovering. This represents an excellent opportunity to acquire a beautifully finished bespoke example without having to wait for the year plus lead time and year plus build time necessary for E.R.A. to build another one. Moreover, the car is being offered at a significant discount compared to what it would cost to replicate and what the commissioning owner paid. While outside of our typical inventory wheelhouse, this is without question one of the finest reproduction Cobra’s we’ve ever seen and we’re as proud to be offering it as we know its buyer will be to own it.