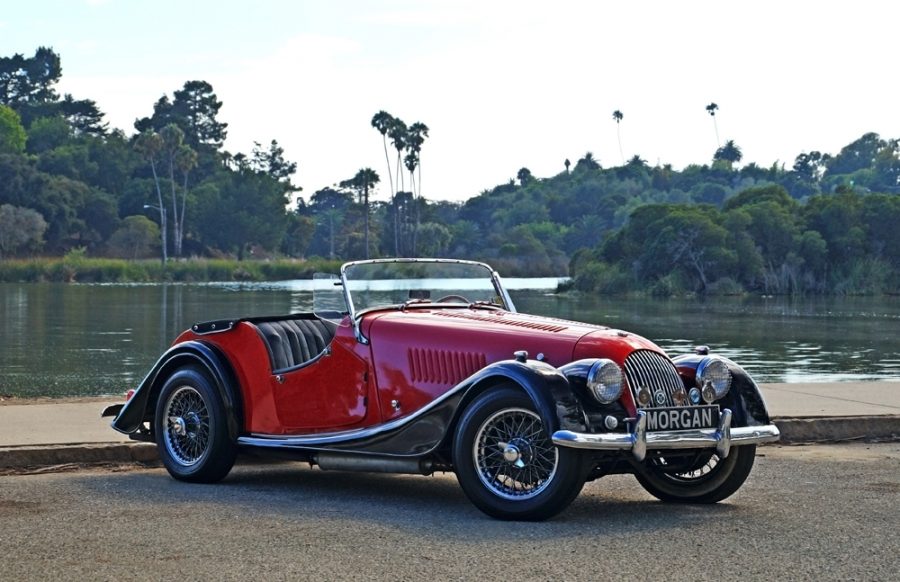 Offered for sale is a striking, exceedingly original, numbers matching, low original mileage 1965 Morgan Plus 4 two seat Roadster, with a body finished in ever sporting Corsa Red with Black steel wings over its original black leather interior. Per the original Morgan Chassis Record that accompanies the car, Chassis No. 5891 was ordered new by its original owner through Fergus Motors in New York before being delivered to his home in the Pacific Northwest in early April of 1965. A true garage queen, he used it sparingly for the better part of two decades before selling it to a business associate who would also provide it a well cared for, merely weekend touring existence during his decade plus of stewardship.

In 1993 the second owner consigned the car with Park Place Ltd., a well-known classic and exotic car dealership in Bellevue, Washington, who in turn sold it to its third owner, a gentleman from Olympia, WA. Having always been enamored with the thoroughly British, thoroughly unique marque, the Morgan was as much a piece of art to him as it was something to be driven, and over the ensuing twenty plus years he only accumulated some 4,200 miles. Throughout those years the car was always garaged, properly maintained and never exposed to the elements, benefitting from true pride of ownership until the third owner’s death in late 2013. We were able to acquire the car from the third owner’s son, who was also the executor of his estate.

Of all the classic British post-war roadsters produced, no other car is quite as unique or charming as the Morgan Plus 4. With a simple and strong drive train, agile handling and a truly visceral, sporting drive quality, sitting behind the wheel of a well-sorted Morgan is ceaselessly grin-inducing. Timeless and distinctive styling never fails to garner appreciation, part of the reason these iconoclastic cars are perennial favorites at shows and touring events. The early and mid 1960s models are really the most representative of the breed and easily the best to drive, with the significant benefit of the Triumph sourced inline four-cylinder engine.

This striking example is fitted with its original 2138cc Triumph TR4 engine (Engine No. CT40240) and original 4-speed gearbox and it is an absolute thrill from behind the wheel. The car starts easily, idles consistently and pulls strongly and smoothly through each of the gears. After a long cruise down the coast in 75 degree weather (part of which was in significant traffic), I’m happy to report that the car shows no indications of overheating, a common issue with under-maintained examples. The transmission is crisp and smooth, the suspension is stiff and the car drives and brakes straight. The best way to describe the car mechanically would be to say that it is entirely turn-key, completely tight, and needs nothing to be enjoyed.

The two-tone Red and Black lacquer finish shows its age, with consistent imperfections throughout, however, as the pictures show, the car is still abundantly presentable. Similarly, all of the brightwork is in good original condition, as are the wire wheels. Per the Morgan Chassis Record, the car was originally outfitted with white wall tires, as it is today (although they’re turned inwards), however, while serviceable, the tires are quite old and should probably be replaced. We wanted to leave the option of regular or white wall tires to the next owner, but can certainly help source their tire of choice. The undercarriage is clean and rust-free and all of the ash wood is entirely solid. The original leather seats and interior carpets have a wonderful patina consistent with their age, and the wood dash is in excellent condition. Hardly ever used, the original soft top and soft top frame are in great shape as are each of the original side curtains.

This is an exceptionally original car, not a restored trailer queen, but it will undoubtedly provide its next owner with years of reliable motoring fun as a beautiful weekend driver. Low original miles, striking color combination, solid matching numbers mechanicals and charming original patina; if you’ve been looking for a correct, honest and well cared for Morgan Plus 4, this car deserves your serious attention.