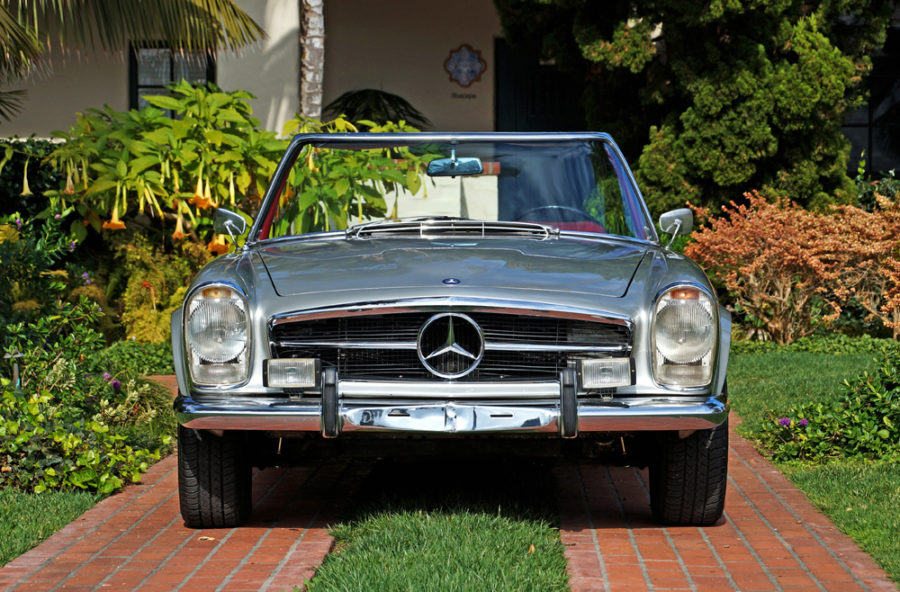 Offered for sale is an exceptionally beautiful, mechanically strong and entirely solid example of a European model 1967 Mercedes-Benz 250SL finished in ever-desirable factory correct Silver Grey Metallic (DB 180) over a factory correct and beautifully offsetting red leather interior and fitted from the factory with the preferred manual gearbox. Beautifully reconditioned by its most recent owners, the car is correct and numbers matching, a striking and honest example that is sure to provide many years of appreciation, pride of ownership and motoring enjoyment for its next owner.

Sold new in Frankfurt, Germany, the car’s first owner was believed to be a Mr. Earl Williams, a U.S. Army Officer who brought the car back to his home in Tucson, Arizona when his commission ended. Mr. Williams would own the car until 1985, at which point he sold it to a Mr. Milford Juhl of Boone, Iowa. A retired Colonel in the U.S. Army Air Corps, Mr. Juhl knew Mr. Williams because he wintered in Green Valley, AZ (a suburb of Tucson) following his retirement in 1982 following service as the Iowa State Aviation Officer, Iowa State Vehicle Controller and personal pilot to Iowa’s Governors and state officials. Mr. Juhl’s tenure of ownership would extend nearly 24 years until his death death in 2008, his estate selling the car in 2010 to its third owner, a classic car enthusiast from a neighboring county. We were able to acquire the car from its third owner in late 2014.

An exceedingly high quality repaint in the factory correct color by the third owner in 2011, the car’s Silver Grey Metallic finish is striking, entirely consistent, lustrous and deep, contrary to the muddy finish layered on so many 1960’s era Silver Grey Mercedes cars. The car’s undercarriage is entirely solid and free of rust and the car’s body is entirely straight, retaining factory correct and consistent panel fits and gaps throughout. This is not a concours car, but flaws are few and far between and the pictures accurately represent the car’s gorgeous condition, including the unblemished bumpers, trim and original glass. Its next owner will undoubtedly be proud to show it at any Mercedes Club event or any local car show.

The car’s interior is equally as beautiful, the seats having been reupholstered in red leather by Mr. Juhl in 2000 and the carpets reupholstered in German square weave by the third owner in 2013. In each instance the correct materials were used and installed by professional craftsmen. The end result of this refurbishment is a virtually flawless interior, the unblemished dash housing fully functional gauges and its original Becker radio and clock, capped off by wood trim in excellent condition. The car’s factory-correct black German canvas soft top shows only minimal wear and retains a clear rear window, and the car’s original hard top is in excellent original condition.

Following years of documented professional maintenance, the car is also excellent mechanically, the original 2.5L engine starting effortlessly, idling consistently and pulling strongly and smoothly through the transmission’s gears with excellent and even compression across all cylinders. Having enjoyed the car on a recent jaunt down the coast to Malibu, I can report that the car performed beautifully, the engine running strong and cool, the transmission shifting crisply and the brakes and suspension tight and strong. One of the W113 Pagoda’s most appreciated aspects is that they are truly mechanically modern enough for everyday use on today’s roads while maintaining all of that wonderful vintage look and appeal, and this car is no exception. The car is responsive with an entirely comfortable ride quality, whether tooling around town, winding through the canyons or bombing down the highway.

The 250SL was a vast improvement to its 230SL predecessor and certainly the rarest of the Pagodas, making up less than 11% of the W113 production run. If you’re looking for a beautiful, entirely solid, numbers matching and mechanically sound 250SL, this car deserves your serious consideration. Finished in a desirable livery, this is a wonderful example that’s sure to appreciate and offer years of enjoyable and trustworthy service.